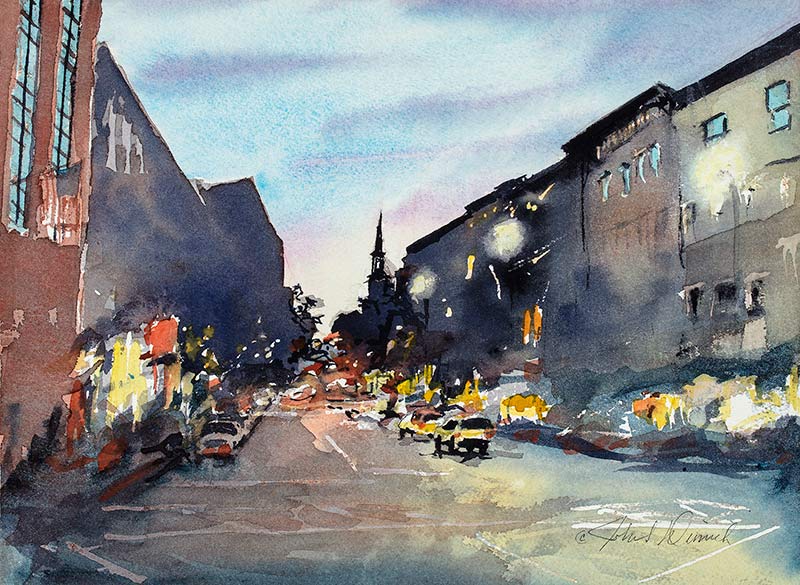 John S. Dimick’s paintings of “In and Around Brattleboro” are featured at Vermont Artisan Designs for the month of June. He has captured various scenes of Main Street, Elliot Street, the Brooks House and other sites around town.

Dimick, a member of the Vermont Watercolor Society, recently spent time at the Vermont Studio Center to work on his painting skills.

Dimick sketches from a photograph. He uses a grid system to set up a painting and works to find a balance between detail and looseness in his work.

In addition to the original paintings, Vermont Artisan Designs also has limited edition prints and cards of Dimick’s work.

Also featured for June are oil paintings of a variety of animals by Gay Freeborn. They are part of a series called "Love Story" and depict the animal usually held by a caring human. Included are a frog, a black lab, a chicken, a fawn and a fox.

"I have chosen to focus on capturing the likeness and emotions of animals as well as portraying the relationships they have with humans."

"My paintings are done in oil on canvas, linen or wood panel and convey with urgency the motion, shape and appreciation I have for the animal. I use under painting, thinning mediums and thick over painting to sculpt my subjects on the canvas bringing them to life in an unconventional form."